Terraria is a 2D video game that involves exploration, resource gathering, crafting, and fighting. It was first released on May 16, 2011, and is still being updated and maintained by the developer. The goal is to explore the world and find useful resources, defeating enemies and bosses to make the land safer and more habitable. Terraria is one of the most popular indie games in the world.

Gameplay involves exploration, resource gathering, crafting, and fighting. The game starts with your character having essentially nothing to work with. You can explore your world to find items, defeating enemies and bosses to make the land safer. Exploring is fun, but you can't explore very far before you run out of inventory space.

By defeating enemies and bosses, you can collect various items that can help you explore farther and farther into the world. There are generally two types of enemies that will show up. The first are the natural enemies of the game, which are mostly easy to defeat. The second are the bosses, which will give you a challenging fight.

The graphics of Terraria are 2D and pixelated and, because of this, the game is able to run on a wide range of hardware and is easy to pick up and play. There are many objects in the game that are animated, including enemies. The developers have done a good job of creating a world that is both immersive and imaginative.

The player can switch between these easily through the options menu. The game also has the option to change the controls to suit the player's play style. The game's controls are easy to understand and work well.

The game offers a lot of replayability because of the large number of items and enemies that the player can encounter. There are no quests, and the game can become stale quickly.  But on the other hand, the player is free to do whatever he wants and create his own challenges, goals, and tasks.

This game is very fun and it is easy to play. Terraria is a game with a lot of replayability. You can play this game for a few hours and then come back to it to play again the next day 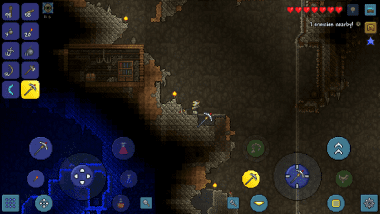