Dota 2 vs League of Legends 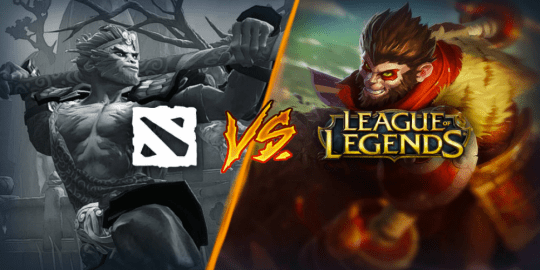 Dota 2 and League of Legends are two different games with similar gameplay. Both of the games are strategic multiplayer online battle arenas (MOBA) where players control one player character and fight to destroy the opponent's base. Dota 2 is more of a tactical game with emphasis on teamwork and strategy, while League of Legends is more of a fast-paced action game with emphasis on individual skill and reflexes. This article discusses the differences and more.

1. League of Legends is more fast-paced, with emphasis on individual skill and reflexes.

In League of Legends, attacks are stronger in comparison to champions' health values, thus, the fate of the champion can be decided way faster than in Dota. Also, in LoL, towers also have comparatively stronger attack, so it is way more dangerous to get close to towers.

League of Legends gets new characters and items more often than Dota.

3. Dota 2 is more tactics-based and team-oriented.

In Dota 2, each hero has their own skills, mechanics and abilities, so it is more dependent on team cooperation and strategy. In League of Legends, abilities of different champions sometimes look similar, which causes different characters to be able to do same things, but that isn’t necessarily a bad thing, it leaves players with a wider choice for different tactics they can come up with.

4. Dota 2 has a bigger map and longer game length.

In Dota 2, all the heroes take more time to create and usually when they come out, they are balanced quite well, while Riot Games has a tendency to make every new hero incredibly strong and nerf them eventually.

6. League of Legends has a lower entry threshold.

In League of Legends, the entry threshold is lower. In fact, at the beginning, you only need to know how to click and hold the right mouse button. In Dota 2, you need to have at least some experience with MOBA games.

In Dota 2, players can use voice chat. In League of Legends, voice chat is not available. However, it is hard to say, is it good or bad.

So similar, but so different

Overall, both games are good and have their own strengths and weaknesses. It all depends on your style and preferences. Dota 2 is a bit more serious and tactical, where you need to coordinate with your team, while League of Legends is more fast-paced and action-packed, where you need to rely more on your individual skill. If you like to be tactical and team-oriented, Dota 2 is the game for you. If you like fast-paced action and individual skill, League of Legends is the game for you.